Considered one of the best sandwiches in America—at least by the Travel Channel's standards—the roast pork sandwich at Tommy DiNic's is a family tradition. That shouldn't come as a surprise, since the Nicolosi clan has been part of Philadelphia's story since 1918.

That was the year that Gaetano Nicolosi debuted the family's first butcher shop in South Philadelphia, dubbing it Nicolosi's. All five of his sons worked right alongside him at the family business. It was a short commute to work for all, given that they lived right upstairs. The butcher shop evolved into part sandwich shop, and its roast pork and beef sammies became so popular that one of Gaetano's grandsons, Tommy Nicolosi, joined forces with cousin Franky DiClaudio to open the first DiNic's. (Their surnames joined forces, too, in the new eatery's moniker.)

Now located in Reading Terminal Market, Tommy DiNic's continues to serve the same juicy roast pork sandwich that made it locally famous. In fact, the menu only contains six options: pork, beef, meatballs, Italian sausage, Italian pulled pork, and brisket of beef. Those are more than enough for most patrons, many of whom like the broccoli rabe and sharp provolone on the sandwiches as much as the meat itself. 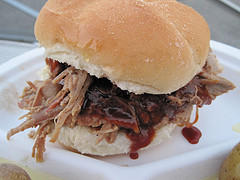